Summer Days on the Farm 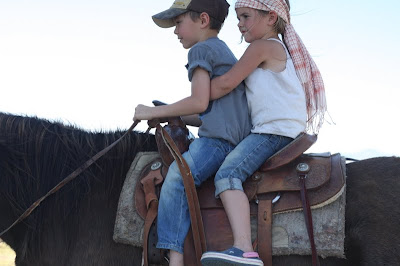 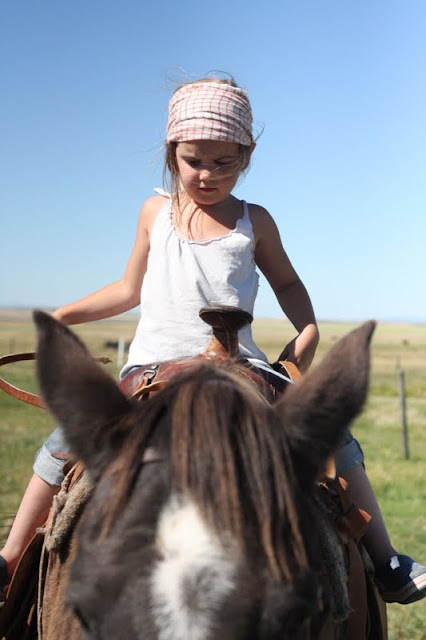 A patient old horse. Hot sun and clear skies. Long days on the farm. Cousins. And the mountains just over there. That is the definition of my childhood summers. Both my parents were raised "on the farm" and although I was certainly a city kid (to my shame), I spent a lot of time with my grandparents and cousins wishing - and kind of pretending - I was not a city kid. It seems as though most of my many cousins were boys - they certainly outnumbered Lorna and I. So we stuck together and whenever we could manage it we rode Flicka - a beloved old mare; patient, gentle, and well-accustomed to little ones after close to 30 years of life. She let us scramble onto her bare back and generally went where we directed.

A few miles down the road (at my other grandparent's ranch) was old Baldy. Grandpa Bradshaw was not particularly imaginative when it came to naming his horses - Brownie, Blondie, Blaze, Pink, and Baldy being a few I remember. I learned to ride on Baldy. He was old and patient and probably too tired and lazy to get me into any trouble but one very memorable summer evening when I was 5 years old I had an Adventure on his broad back.

It had been a beautiful hot summer day and the evening was lazy and golden. My dad and uncles were talking on the porch after dinner. Some of the family were walking around the pasture by the house with little bottles of grandma's homemade root beer. I was riding Baldy with my little brother on behind - pure heaven for me. Mike had a 'switch' in his hand and it was his job to persuade Baldy to keep picking up his feet - however slowly. Mike was not particularly into horses and - being bored - he was whiling the time by laying down on Baldy's rump and sitting up again (like sit-ups). Just as we went over a small ditch, he performed this feat of daring and "switched" the horse. Too much, too fast for old Baldy and he took off at what seemed to me to be a tearing pace. Mike slid off the rear end but I hung on for dear life. The barbed-wire fence was approaching alarmingly quickly and I was yelling "Daddy! Daddy!" at the top of my lungs (adding fuel to the fire behind Baldy). Although I was instructed to "Hold on" and could see my dad running to catch us I was certain that lazy old horse was going to jump the fence and that was just too scary....so I bailed. Into a pile of manure. At least that's how I remember it.

A couple of weeks ago we took Aubrie to Grandpa Bradshaw's old ranch (now my Uncle Dean's) so she could live her dream to ride a horse. Watching her on patient old (29 or 30-ish) Lady brought back so many wonderful memories. And walking behind or beside her I was overcome with awe for the beauty surrounding us that I absolutely took for granted as a child. I realized too how privileged I had been to be a city kid but have so much the pleasures of the country. To have spent long, lazy days on patient old horses and - at the end of a day's adventures - to go in to loving, kind, interested grandparents. I do believe I had the best, most golden, of childhoods. 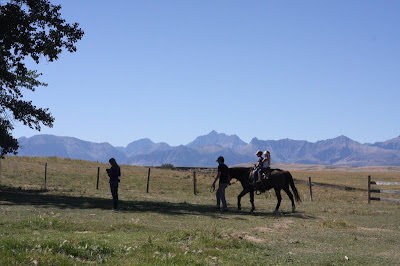 Lady is old, her coat is rough, the glossy beauty she once had gone but she was sweet and gentle and sure made a little girl happy. To Aubrie she was as pretty as the young sleek horses she shares a pasture with. Good lesson.

it was such a fun afternoon:) its also fun to hear stories from when you were just little. I love southern AB. its so beautiful!