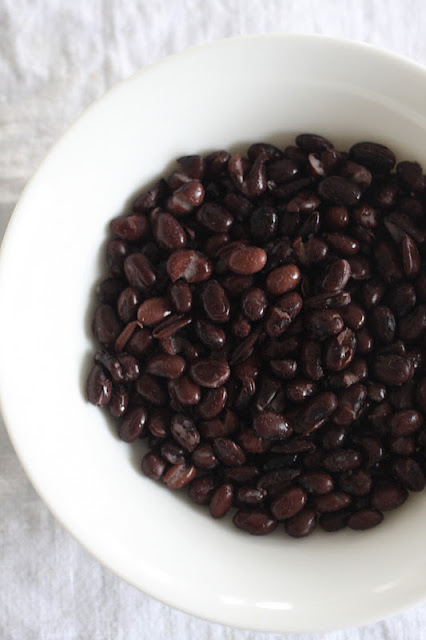 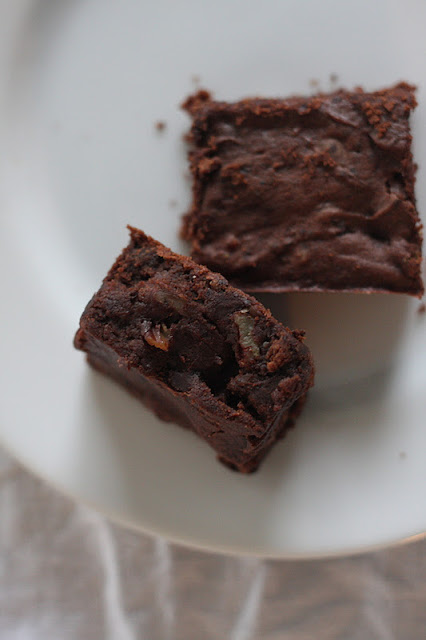 During the holiday I made a batch of totally yummy but honestly homely black bean gluten-free cookies. They were the kind of thing that one feels compelled to apologize for to (even) close friends and I unfortunately took them to an extended family gathering - no time to reboot. oh well. They were so good that I will attempt to fix what went wrong another day and so good that I have been eyeing several recipes for black bean brownies for a few days. Happy day!! these are definitely not homely and absolutely amazingly yummy. Not yummy-for-a-healthier-option yummy but just plain want-to-eat-the-entire-pan yummy.  The texture was perfect - dense and moist, fudge-y. The black beans are entirely invisible - but agreeably add all the nutrition they happily bring to the table. I chose to make my brownies gluten-free* but that option is entirely up to you.

The recipe I decided to use is from Spilling the Beans: cooking and baking with beans and grains every day by Julie Van Rosendaal and Sue Duncan. I have tried a few recipes, loved each one, and am anxious to try virtually every one in the book - and that is rare!

update:
If you don't have any unsweetened chocolate in the pantry (or if you just prefer this substitution - which you may after trying it) you can use 6 Tbsp of cocoa powder and 2 Tbsp of extra virgin coconut oil for the 2 oz of unsweetened chocolate. The little bit of coconut oil is really just perfect. So much so that I always use this tweak now.

Another good tweak is 2/3 cup honey instead of the coconut palm sugar. You can taste the honey just a bit - lovely.

Spread the rinsed and drained beans out on a double layer of paper towel and blot gently with more paper towel to remove as much moisture as possible. (I think this may be the critical step not suggested in the ugly-cookie-fiasco, so don't neglect to do it.)

Melt the chocolate and butter together in a small saucepan over very low heat, or as I did, in the micro-wave being careful to stir frequently so as not to burn the chocolate. Remove from heat and let cool slightly. In a separate bowl whisk together the salt and flour.

Place the dried-off beans and the butter/chocolate mixture in a food processor and and process until very smooth, scarping the walls of the bowl a couple of times. Add the eggs, sugar, and vanilla - process again. Scrape the mixture into the dry ingredients and gently fold together. Add the pecans and chocolate bits and combine.

Scrape the batter into a buttered 8x8" pan and smooth the top. Bake for 25-30 minutes, or until the batter doesn't jiggle when the pan moves - a toothpick inserted would come out very chocolatey. Cool completely on a wire rack or (as Julie and Sue say) you will be eating them with a spoon. I've got say that doesn't sound half bad! Store in the fridge if you like a firm, slightly chewy texture or at room temperature if you like them softer. (Ours are at room temperature...for as long as they last!) 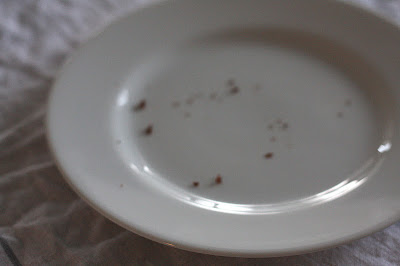 *For this recipe I used C4C - a gluten-free flour mix sold at Williams-Sonoma. In this, as in other recipes I have used it in, it was a complete success. I have tried another gluten-free flour mix that I found to be somewhat grainy and not appealing to me. A custom mix of gluten-free flours would also work well I think, but that's an entire post for another day.
If you don't care about gluten and want to use regular all-purpose flour simply use the same amount (1/3 cup) which is not much flour for a pan of brownies! - but too much if one is gluten intolerant, I know.

**Because Eden is committed to eliminating processed sugar as well as gluten from her diet (and I knew I would be sharing these with her) I chose to use this natural sweetener as an alternative to white sugar but an equal amount of white sugar would certainly work.

This recipe looks amazing! I can't wait to try it!

I haven't heard of coconut palm sugar before but I'm guessing I can find it at a health food store?

It is pretty readily available at health food stores. Becoming more so all the time.

Hope you like the brownies as much as we did :)

lol, mom- your crazy! those cookies were SO good. I think I ate half the batch within 30min:) and thank you so much for tweaking these recipes for me! they are so so good. and these brownies.....wow.

Nobody I would rather 'tweak' for sweetie ;)

Made these yesterday and seriously can not stop eating them!! So good! Only change I made was to use Earth Balance's Buttery spread in place of butter in order to make it dairy free for my mother-in-law who can't have gluten or dairy. They turned out just as good as you said.

Melissa - another good choice if you need to substitute for the butter would be (my personal favorite) coconut oil. Thanks for the comment - so happy you like them :)