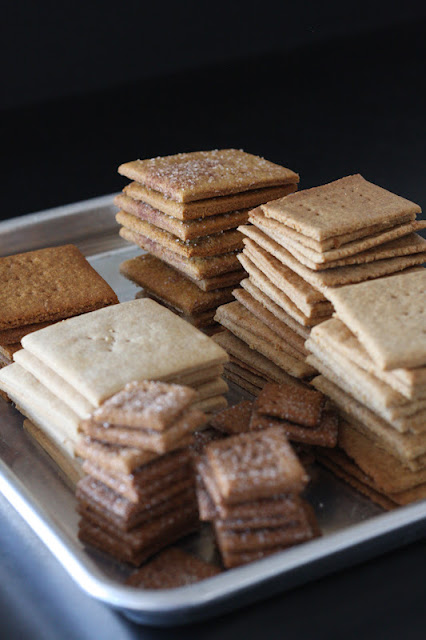 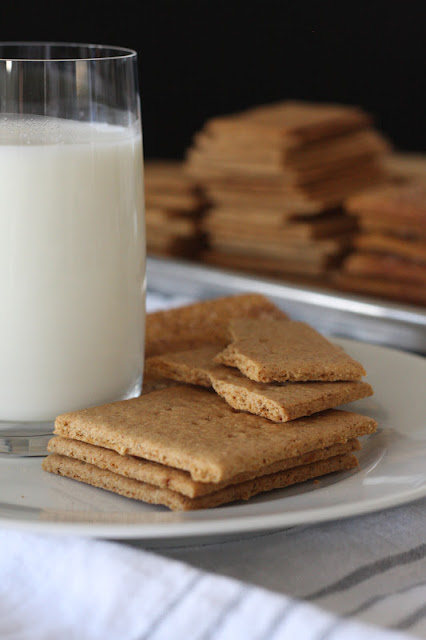 Graham wafers and I go way back. They have been a long-time favourite comfort snack. A dependable, familiar, slightly sweet crunch that was perfect with a glass of milk after school, before bed, or (later) mid-afternoon when the kids napped. Cinnamon and sugar-dusted or naked, I just really, really like them. They pretend to be nothing more than they are - no glamour or decadence, just simple goodness. Like the best people.

I have been on a quest (if that is not too grand a term) to make a wonderful home-made honey graham wafer. I have tested no fewer than five versions and taste-tested said versions with whoever was near and some who are dear. I made a gluten-free version ( a top contender even among those who don't avoid gluten), tried Smitten Kitchen's adaptation of Heidi Swanson's (101 Cookbooks) version of Nancy Silverton's recipe, and referred to Martha Stewart and Alton Brown. Some were too sweet. Too much vanilla. One try too salty. Another too dry. I tried a mash-up of the recipes, made a few minor changes to accommodate my personal likes and ended up with something we all think is pretty hard to stop eating. My tummy was certainly tight a few times during the process.

Why would one bother to make this simple wafer at home when they are so readily available instore? Because they are simply so much better. Better in more than taste - although that is a considerable motivation. Better in quality of ingredients (my apologies to Nabisco and manufacturers of no-name brands), better nutritionally, and better fun. These wafers have real, whole ingredients and smell amazing in the oven. They are so, so yummy naked but spread a little left-over cream cheese icing on and make a cookie sandwich and bliss out. Or how about some homemade nutella. Or better yet, some homemade nutella and a roasted marshmallow. Or the ultimate ... a roasted homemade marshmallow squished between two honey graham wafers that have been spread with a smear of homemade nutella....sigh. Or yeah, just plain and simple. With milk.

In a food processor bowl combine the flours, sugar, baking powder, salt, cinnamon, and ground chia seed. Pulse to mix. Add the butter pieces and pulse until the mixture is like a coarse meal.

Whisk together the honey, milk, and vanilla. (Start with 4 Tbsp milk, mix that in and add more milk if the dough is too dry.) With the food processor running pour the mixture into the dry ingredients. Mix until the dough just comes together. It will be quite soft. Gather into a ball, wrap in plastic wrap and let sit for 30 minutes.

All the recipes I looked at advised refrigerating the dough for 30 minutes to an hour before rolling out. I tried that two times and both times was dissatisfied with the process and result. Actually, the only part of making these wafers that was not purely fun and easy was rolling them out. The dough is really very moist and soft and regardless of the method employed in rolling (flouring the surfaces, using two sheets of parchment paper, chilling the dough) I was ready to scream and or pull my hair out. Fortunately for my hair and sanity, I tried - out of simple desperation - using ziplock bags. Genius (she modestly says). Simply this - cut the zipper part off two large size ziplock bags and cut down the side 'seam', effectively opening the bags up. Lay one bag down, put about 1/3 of the dough on that and top with the other opened bag. Go to town with your rolling pin. When the rolled out dough is 1/8" thick peel back the top bag, replace that with a sheet of parchment paper and flip the parchment paper, dough, and ziplock sandwich onto a baking tray. Peel back the ziplock bag. Cut the dough into squares with a pastry (or pizza) cutter - I didn't get too fussed about perfectly even squares and kind of liked the very homemade result. Prick dough-squares with a fork in rows.  Bake at 350 degrees F for  20-25 minutes. Allow to cool on the baking tray to harden further.

Watch your wafers the last few minutes. You want them to be firm and toasty-golden. As you can see from the photo, the last batch I baked (the little tiny ones for little tiny hands) got a bit too brown. They are still good but not as good - I do that more often that I would like to admit when baking the last tray of a batch of cookies. Repeat the process until you have used all your dough. If you want to dust them with cinnamon and sugar, do it before baking, after rolling and cutting.

*Final note: Graham Flour - you can buy graham flour (Bob's Red Mill has some) or you can effectively make your own by mixing white flour, wheat bran, and wheat germ in the ratio found in whole wheat. One cup of graham flour can be made by combining
84 gm white flour
15 gm wheat bran
2.5 gm wheat germ 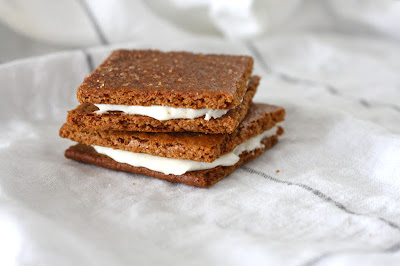 
Follow the same method as above. (I pricked X's on the gluten-free wafers to distinguish them easily from wheat flour wafers.) Now everyone can have s'mores at the next campfire or stove-top roasting session.
Posted by Cheri at 6:34 PM

I think I star your recipes more than any other posts. Look at how perfect those look. And I just finished a glass of milk with grahams, too.