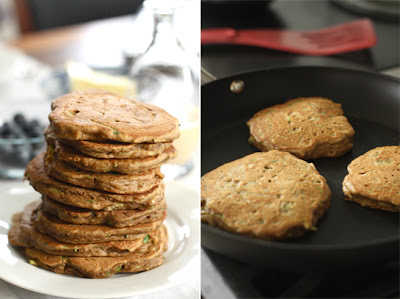 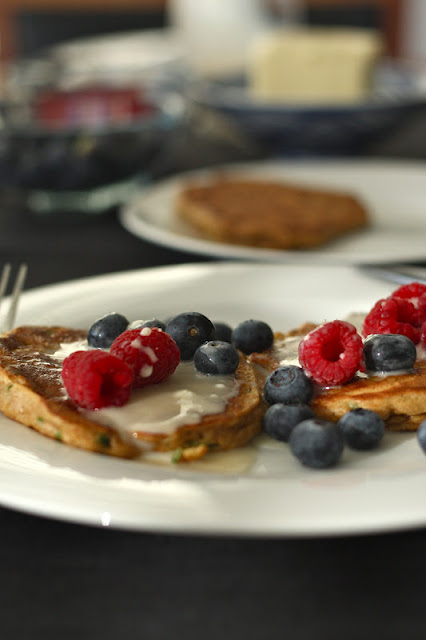 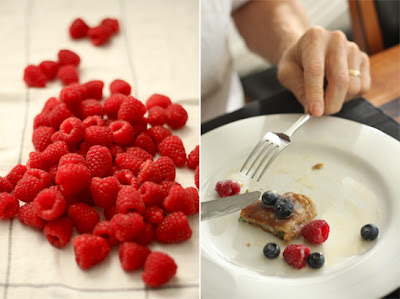 The justification for another pancake recipe is simple: the zucchini is 'on'. 'On' for zucchini means full-stop ahead. Not that I am complaining - we wait all year for this bounty. Even with the mythical abundance and sad jokes about locking doors, my five (yes 5) plants have a hard time keeping up with the demand. There is zucchini bread, chocolate zucchini cake, chocolate zucchini muffins, lemon zucchini cake, and bbq'd zucchini (a family fav). It takes a lot of zucchini just to run through the repertoire once and once is never enough! Of course, as we love all of those, I am always looking for more to love so when I saw a recipe for Zucchini Bread Pancakes over on Smitten Kitchen I determined that it would be one of the first new zucchini recipes to try this season. We were not disappointed. Maybe next year I will have to plant yet another seed :)

I have made these pancakes twice. First time, just as Deb wrote the recipe. Second time, I made a few tweaks. Not because I thought I could make them better ... I just wanted to increase the nutrition a bit. After all, we most often eat pancakes for breakfast and we keep hearing how important that meal is healthwise. So I used almond flour in place of some of the white flour, sprouted whole wheat flour, replaced the buttermilk with soured nut milk (almond today), and added sprouted ground chia seed. I also cut the sugar and used 1 tsp of honey instead of 2 Tbsp of brown sugar. Even with nothing on them, the pancakes were still pleasantly sweet. So... all good changes nutritionally and none that compromise yumminess.

Deb's suggestion to mix plain yogurt with maple syrup is simple and absolutely genius. I mixed 1/2 cup yogurt with 3 Tbsp maple syrup - whisked a minute and yummmmm. A few blueberries and raspberries were pretty, healthy, and delicious.... but just pancakes and syrup would still fill the bill. For sure.

Heat a griddle or large frying pan over medium heat. Melt a tiny bit of butter and spread it around with a spatula. Scoop batter in scant 1/4 cup dollops onto the pan and using the back of the spoon spread the batter out a bit. Cook until bubbles appear. Flip and cook until golden on bottom.