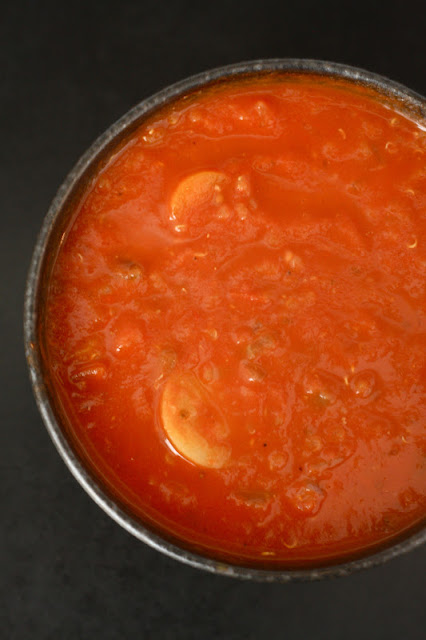 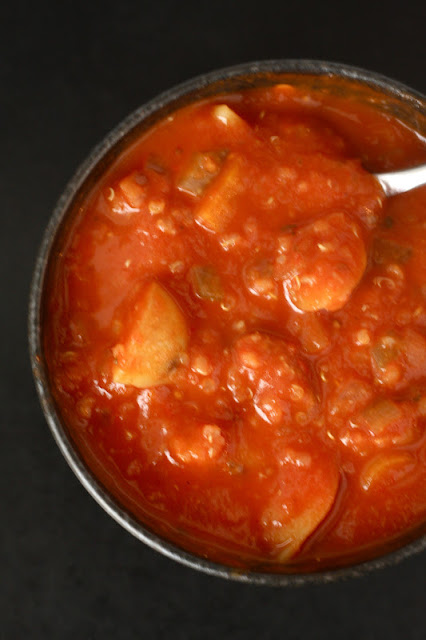 I am relieved that it is finally November because perhaps now we can justify the snow and cold! It was really hard to get into the spirit of Halloween when it just felt more like January. (I know that is a bit of an exaggeration - when January is truly here this weather will seem downright lovely but I don't have my thick Canadian-winter-blood running yet.) At any rate, between the snow and cold and a sore throat/cough thing soup was all I wanted to eat this week. It was the perfect chance to try something that had been  rattling around in my mind for a few weeks.

Jonathon has recently started a new job (as President of Martha Sturdy - and yes, I am proud!!!) and as part of team-building had a retreat to Martha's beautiful ranch in Pemberton, BC. When Jonathon was telling me about the event he waxed slightly poetic about a tomato soup that Martha had made. It sounded so delicious that I was determined to give it a try. A rich, thick tomato soup with vegetables. This is not Martha's recipe - just a soup I made inspired by Jonathon's ode to Martha's soup. I would love to try her soup but have to say that we thoroughly enjoyed what was in our own soup pot. As an endorsement I offer this: David quite dislikes eating the same thing in close succession but we had this soup for our evening meal one day and for lunch the three days following and he mentioned that the soup was so good that he was really enjoying it - even three days running for lunch. That may not seem like much to anyone else but it is high praise indeed!

This soup is almost as easy as opening a can and so much better. It is tangy with the tomatoes and herbs, full of vegetables and smoothed out with just a tiny bit of cream. The quinoa adds more fiber, additional protein, and nice body.

The last day we had this for lunch I added a few drops of Louisiana hot sauce just to change it up a tiny bit.

And as for Halloween? We did something we had never done before - filled a huge bowl with treats, put them on the doorstep with a sign, and retreated to watch Snow White and the Huntsman - which ended up being a pretty good Halloween movie.  The sign recommended taking a couple of treats but since the bowl was empty by 7:30 and it was awfully cold for trick-or-treating, my guess is that the little ghouls took by the armfuls. lol

p.s. you should really check out Martha's house. Well, one of them - it was featured this last summer in Canadian House and Home magazine. Martha is an iconic artist and her favoured medium is resin. From housewares to furniture to canvases and sculpture - all very cool and beautiful.

Melt the butter in a large heavy pot over medium heat. Add the onion and garlic. Cook, stirring,  until translucent. Add the sausage, celery, potatoes, and carrots and cook for a minute or two, stirring to coat the vegetables and let things begin to get carmel-y edges. Add the chicken stock, quinoa, and oregano. Bring to a boil, reduce heat and simmer (covered) until the vegetables are tender - about 20 minutes. Stir in the crushed tomatoes and bring back to a simmer. Cook for another 10 minutes. Stir in the cream and add the salt and pepper to taste.

Sounds amazing! And easy:) perfect for me.

I think I need to try that, unfortunately minus the cream, it might not be the same, but I probably won't know the difference.

Shan, it is not the same but it is just as good. Hopefully it will be compatible with your diet. Let me know :)

Do you cook the sausage before cutting it?

Donna - I didn't cook the sausage before cutting it. It's a bit messy but not a big deal. Good luck. Hope you like it :)