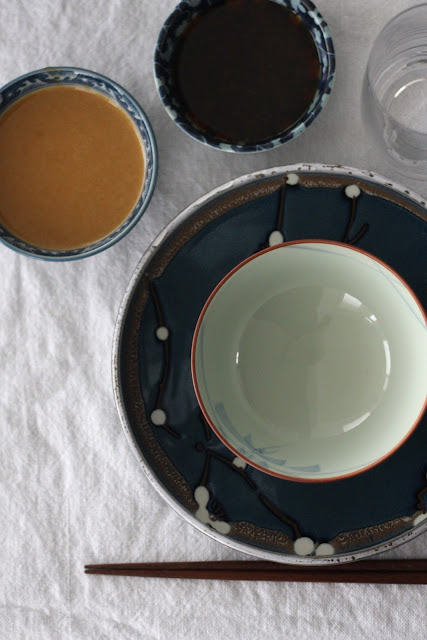 Shabu shabu is one of our favourite easy healthy meals. In our house it is elevated to special celebration status - so birthdays, New Year's , that kind of special meal thing. It was a no-brainer for Eden's birthday dinner last week because it is absolutely clean eating (whole foods, no gluten, no refined sugars). Social and totally delicious. Perfect for the day.

Shabu shabu as a dish is super simple - basically a pot of hot water with a piece of kelp (or not) sits on a tabletop burner. Diners add and swish (the shabu shabu sound) various greens, mushrooms, cubes of tofu, and very thinly sliced beef, pork or chicken. Everything 'cooks' very quickly. Healthy fare but not terribly exciting so far. The excitement is in the sauces. For years we bought our dipping sauces for shabu shabu at an Asian grocers. It never occurred to me to do anything else. It was an expensive way to go (ridiculously so) but that's what my Japanese friends did and so that's what I did. One day I realized that making goma dare was likely not only possible but the way to go. Since that day I have made the sauce a number of times and while I can humbly say that it has never been a failure I also have to admit that I have never felt that it was a total success. Eden's birthday dinner was the day the tide turned. I am posting the recipe for both the dipping sauces mostly because I know I won't lose them here :) and I really don't want to. The stars may never align quite as well again.

Because of the cost of the readymade sauces there never seemed to be quite enough sauce (especially the sesame dipping sauce - the hands-down fav). This recipe made a large batch. Large enough to liberally fill dipping bowls for eight adults and five children, refill an inevitably overturned bowl, and have a generous cup left to dress brown rice veggie bowls for a meal for seven. All that didn't begin to match the cost of a measly little bottle from the store.

A little personal satisfaction that accompanies this meal - I get to use many (but by no means all) of my beloved Japanese dishes. I love layering the pieces, making an interesting statement. A rice bowl, two dipping bowls, a small plate and a pair of o hashi per diner is a good start on displaying the collection. Sort of justifies the passion. lol

The method is so easy that calling it a method is really glorifying the process. After toasting the sesame seeds (either stovetop in a closely watched frying pan or on a cookie sheet in the oven) add all the ingredients to a blender container, pop the lid on good and tight, and give it a whirl on high until the sauce is smooth and creamy. The consistency is quite thin.

thanks mom! I don't know what I would do if you didn't share all your recipes! I love the time and love you put into sharing this with us:)

I love your Japanese dishes and this is such a yummy meal - it's one of those things that you could eat all night because you're never quite sure if you're full and it's SO good.

Great post. Thanks Mom. Can you add a "grocery list" of the greens you buy and the exact cut of meat?

I, too, have quite a fondness for Japanese dishes. I dream of having an eclectic set some day (when the risk of little hands breaking them is less). Fits right in with my love of the Indigo color scheme. Thank you for your recipes. They are so fun and inspiring. I've loved the ones I've tried.