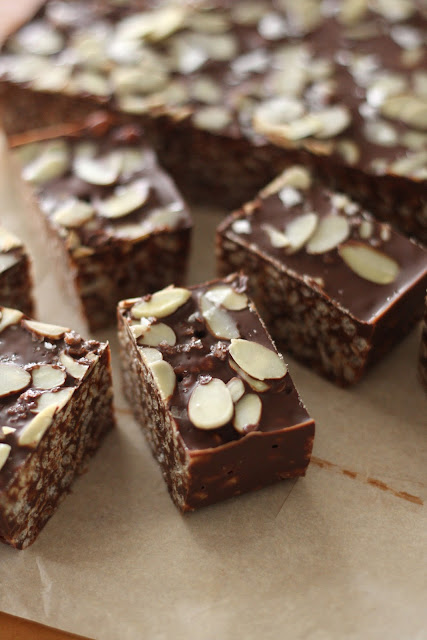 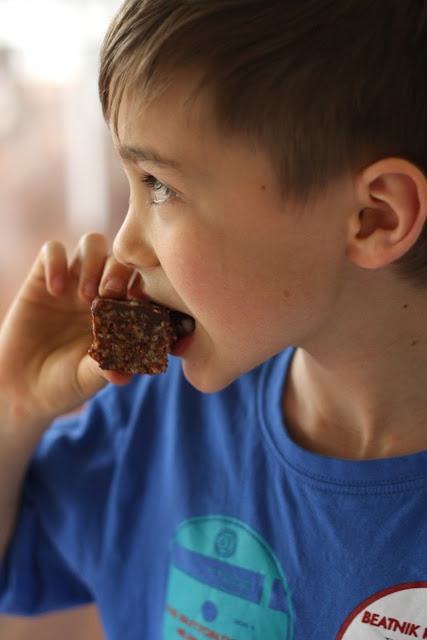 June! I have always loved June. Maybe because it is my birthday month, maybe it is the held-over memories of end-of-the-school-year stuff that seems to fill the month (causing mothers to pull their hair out and kids to rejoice) but it can't be the weather because June in Calgary pretty much means rain. The kind of daily rain that in Japan they call The Rainy Season. The kind of rain that swells the rivers, threatens flooding and awakens the mosquito population. The kind of daily rain that gardens thrive in if you were clever enough to get out there and sow the seeds but that spells a muddy mess if you want to try that project right now. In spite of that reality for some crazy reason reason when I think, read, or hear the word 'June' I think SUN.

Today is June 1, Saturday and sunny! I think that must qualify this as a day that needs at least a mini-celebration. Celebrations - even mini ones - simply need treats. It is in the definition. No treat, no celebration. These chocolate bars are up to the task and in fact, I like them so well that I think simply having a bite of one qualifies as a mini-mini celebration all in itself. I found the recipe over on FOOD52 (a favourite stop for me) with a write-up that intrigued (touted as an attempt at a healthy rice krispie square and called Hippie Crispie Treats). We have been missing our rice krispie squares around here since if I make marshmallows -with honey no less - there is no way they are being melted into the ubiquitous rice krispie squares and any other marshmallow is just a yummy, sweet puff of refined sugar. Which, of course, we avoid now. So... a healthy option sounded promising enough to try. While I am not sure I would add this recipe to the queue of truly healthy it certainly is healthier and healthy enough. AND it is De. Lish. Us! I loved the sprinkle of salt on the top - yummy became amazing.

The only itty bitty tweak I made to the recipe was to decrease the amount of coconut oil in the topping - a choice not lightly made. Coconut oil while incredibly good for one has such a low melting point that 2 Tbsp of the stuff made a topping that was wonderful straight out of the fridge but almost runny 10 minutes later. Messy, messy. 1 Tbsp is about perfect. These squares do not need to be kept in the fridge and if by some miraculous chance they are still hanging around the day after you make them the rice will be slightly less crisp (but in no way even approaching soggy). I have previously always subbed honey or agave for brown rice syrup in any recipe calling for the syrup but for this recipe stick with the brown rice syrup. It is not nearly as sweet as the other two options and enhances the chewy factor. Worth adding to the market list.

I took some over to Eden's for a little market research. The test market is a tough one but the product received a very favourable rating with the testers lamenting the one piece per person I had allowed for.

After I shared my treats, Deacon shared some lego creations - scenes from books he has read. Amazingly he remembers which lego pieces came from which particular lego set. A feat you would be more impressed with if you were to see the extent of the collection ;)

Line an 8x8" pan with a sling of parchment paper and set aside.

In a large saucepan combine the maple and brown rice syrups, then bring to a rolling boil and boil for 1 minute, stirring constantly so it doesn't boil over. You will want to use a larger saucepan than you think you need simply because stirring the cereal into the chocolate mixture can be kind of frustrating if the pan is too small. I know - I did it :) Remove from heat and add the almond butter, chopped chocolate, coconut oil and salt, stirring until everything is melted and smooth. Fold in the rice cereal. Push the mixture into the lined pan and press firmly and evenly.

In a small saucepan melt together the second 1/2 cup of chopped chocolate and the 1 Tbsp of coconut oil. Stir constantly over low heat until melted and smooth. Pour the topping over the rice mixture and spread to the edges. Sprinkle with the sliced almonds and sea salt.

Refrigerate to speed setting or let cool at room temperature for about 2 hours.