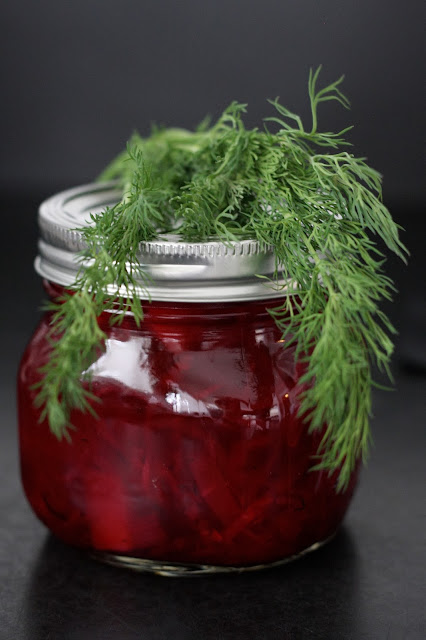 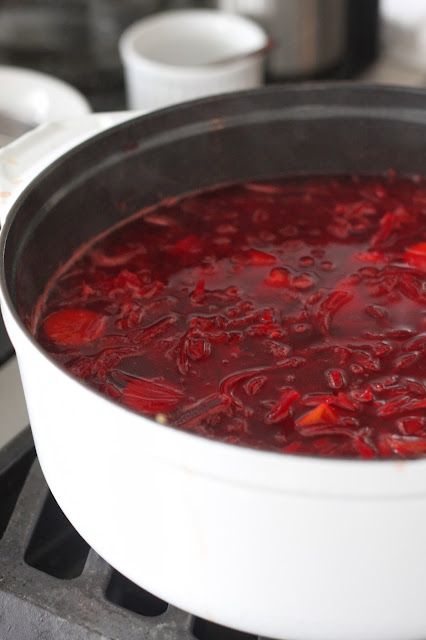 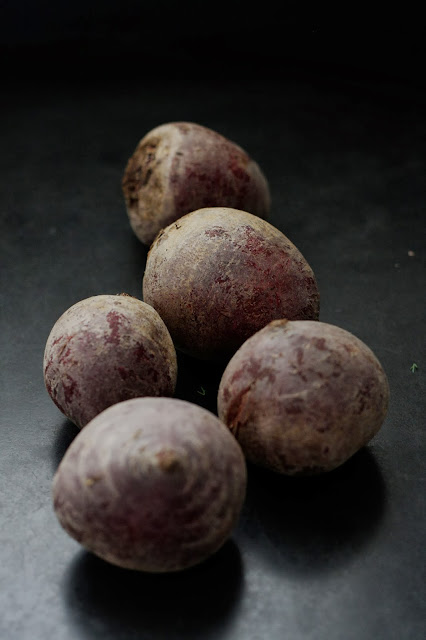 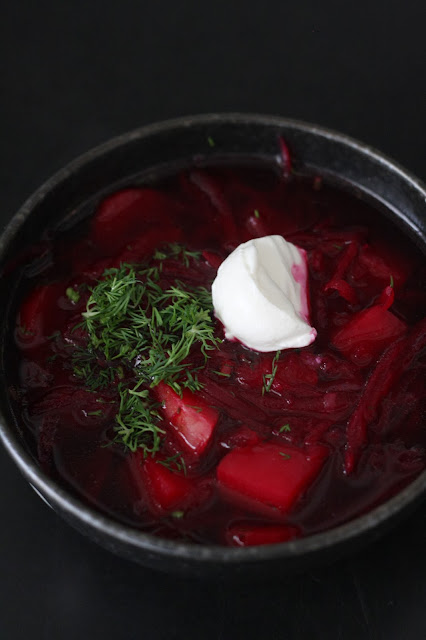 I may be reading too much - looking outside at the falling snow I feel all War-and-Peace-ish and Dr Zhivago-y - and everybody is writing about detoxing and healthy livers and resolutions to eat healthy forevermore. Of course when I went to the market the bin of beets was both homely and beautiful. It was too perfect a storm; I could feel romantic and virtuous at the same time if I made a pot of borscht.

Beautiful borscht (has to be just about the prettiest soup) always makes me think of two things. Russian winter and Merin. The Russian connection is fairly obvious but I should perhaps explain Merin. Mike's paternal grandparents came to Canada from Poland and his Baba made borscht. I know this because after one trip to visit her in-laws Merin came home with a few Mason jars filled with the pretty soup and shared it with me. Prior to this sharing I was not a fan of the beet soup but Baba's soup opened the door. After that shared lunch I tried my hand at beet soup once but I was not impressed and didn't revisit the idea until the other day. I had been reading about the myriad health advantages of wonderful beets (an important source of betaine and folate, loaded with potassium, some magnesium and even a little vitamin C - beets are believed to be an excellent liver tonic and blood purifier) and, to be sure, we love beets whether cooked or raw. Soup is an easy answer to a fast, healthy lunch and absolutely obvious in the cold, cold, snowy winter. And so, borscht.

Some years we have a pretty bare and very brown winter. Other years it snows often - snowflakes falling for hours and hours in a thick curtain. This is one of the years when if one counted wealth in terms of centimetres of snow, Calgary would have to be acknowledged as having an absolute embarrassment of riches. It is snowing yet again today. Beautiful, big flakes drifting down and piling up, adding to an already abundant blanket and deep drifts everywhere. My little vegetable garden has a two foot fence around it (to keep the rabbits out) and today the top of the fence is officially buried. There is a lot of snow. I have never been to Russia - unless reading counts (doesn't) - but I imagine it to be beautifully snowy in winter and (thankfully) ever so much colder than it is here today.

Having concluded that borscht had to be made I searched my cookbook collection and my favourite spots online for a likely-looking recipe. I read reviews and made my own calculations. But really there wasn't much of a contest - who wouldn't be won over by "Dr Zhivago Borscht"? It was a very wise choice. I may not be a borscht connoisseur but I do know good soup and this is good soup. If you don't have a good recipe for borscht - or even if you do - you really ought to give this one a try. I found the recipe on Food 52 - always a good bet - and made a very few, small modifications.

The soup has a wonderful fresh, slightly sweet taste (as one would expect from beets). I like to add a tsp or so (to taste) of apple cider vinegar to my bowl along with another sprinkle of fresh dill. Sometimes I add a tablespoon of sour cream as well. David likes some chopped smoked sausage in his bowl. Many recipes for borscht include shredded cabbage. I dislike overly cooked cabbage but cabbage is very highly thought of in the detox circles, so I decided to shred some very finely and added it to the hot soup the second day we had it. It cooked just enough but not too much. This recipe makes a generous large pot of soup. Enough for several lunches and even a jar or two to share.

Virtuous new year food. Romance. Merin and Russia. Who knew all that could be in a simple bowl of ruby soup?

Add the water to a large heavy pot and set over low heat. Add the oil, chopped onion, and bay leaf. Peel the beets and cut into quarters. Add the beets gently to the water and continue to prepare the other vegetables.

Cut the carrots into rounds and the potatoes into 1/2" cubes, adding each to the pot as they are ready. Add the celery slices and lemon juice. Increase the heat a bit (to a medium-low) and cook until the beet pieces can be pierced easily with the tip of a knife.

Carefully scoop the beets out of the cooking pot and let them cool slightly - about 2 minutes for easier handling. Use a box grater if you must but if you have a food processor this is a good time to pull it out. Using a large hole on your grater or attachment shred the beets, returning the shredded beets to the pot. Cook for a further 10 minutes. Add the dill and season to taste with salt and pepper.

Thanks for sharing this lovely memory of Merin. I didn't know she was such a fan. I'll have to let my Baba know that her borscht was enjoyed when I see her next week! :)b

This makes me want to make borcht and happy that I have beets in my fridge all at the same time! Sounds like a beautiful afternoon.

Cheri, I have to agree that Garry's mother's borcht was amazing. She would always send a bottle with Steve in the early days. I think we may even have a rough draft (outline?) of her recipe that Steve got from her.

I like that she shared it with Merin and she enjoyed it.