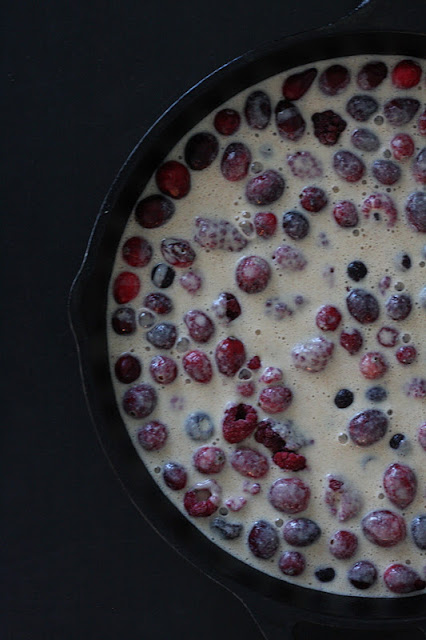 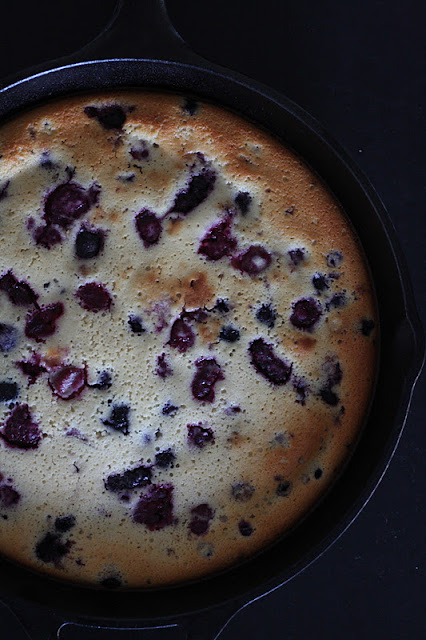 My grandmother used to have an old cast iron skillet. Certainly not very noteworthy  - I expect almost everyone's grandmother had a cast iron skillet but my mother did not and so I found it very intriguing that my grandma never washed hers in soapy water and (stranger still) kept it in the oven! It was one of the more minor marvels of my childhood, one that I probably never remarked and definitely forgot over the years. Kind of like I forgot about my own cast iron skillet, pushed to the back of the cupboard in favour of slick and shiny non-stick skillets. I have grown tired of the short lives of most non-stick skillets and more than a bit alarmed at the possible health risks they may pose, to say nothing of how tiresome it is to always be warning ones children to please use the proper utensils so as not to harm the delicate non-stick coatings. Cue the return of my classic cast iron pan to more regular use - and I am reminded of just why it is a classic. Granted it may not provide the kind of skate-across-the-pan non-stick that a shiny new ceramic or teflon-coated pan does but it is nevertheless virtually non-stick, will last forever with a tiny bit of tender care, and doesn't pose any health risk that I am aware of. Add easy to clean, great for cooking  anything from fried eggs over an open fire to dessert, and totally cool looking (in a classic, I'm not trying kind of way - which is more or less my definition of totally cool). I'd say it is a tool to love.

This week I have used my trusty skillet to make a berry clafouti. It is not the commonly recommended* baking dish for clafouti but it works very well. Traditionally, the dessert is made with cherries but with cherries long out of season I used some frozen mixed berries - cherries, raspberries, blueberries, and blackberries. I also made a gluten-free version as well as one using flour. Equally good either way. All things being equal I think I will probably go with the gluten-free recipe from here out. If clafouti is new to you, it is more custard than cake - very moist and full of fruit. It is super fast and very easy. A healthier dessert option than many. I promise not to start offering two versions of every recipe I share but thought it was worth sharing both the gluten-free clafouti as well as the more traditional. The gluten-free version is healthier on a few levels but both are delicious, easy, and a good dessert choice. Jonathon called one night this week asking for a quick, light dessert recipe to share with friends and I suggested this. The next morning he called back and said I needed to blog the recipe....soon! So here it is.

Scatter the berries into skillet (or buttered baking dish). Pour the batter over top. Bake at 400 F. for 35 - 40 minutes - until puffed, slightly set, and brown around the edges. Cool for 15 minutes before serving (it will deflate). Sprinkle each serving with powdered sugar and top with a spoonful of freshly whipped heavy cream.

Scatter the berries in a 10" skillet and pour batter over top. Bake at 400 F. for 35 minutes or until puffed, slightly set, and lightly browned. Cool for 15 minutes before serving. Serve with a dollop of whipped cream and a sprinkle of powdered sugar - or not.

*If you don't have a cast iron skillet (or just don't want to use one for this) you can make your clafouti in any 1 liter baking dish you like.

Thank-you, thank-you, thank-you from both myself and my neice for this recipe!!!! Laurie and I have both poured over my mother's cookbooks (we split them after she passed on as either of us is only a phone call away)and neither one could find Mom's recipe. Looks fabulous, coming from you I'm sure tastes as good as it looks (probably better!, and BOTH of us have a cast iron skillet! Thanks again!