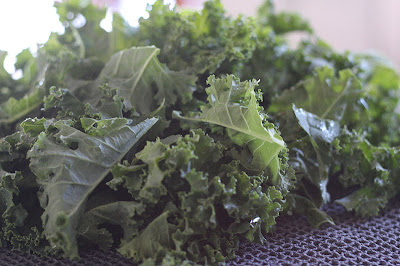 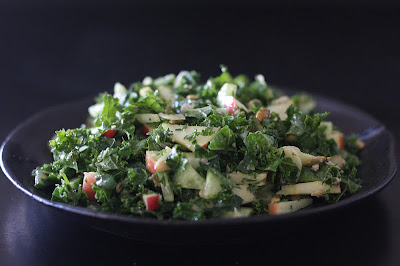 Seems to me like kale is having a moment. Magazine and newspaper food features and cooking blogs alike all seem to be offering kale recipes this fall. Uncertain as to whether I wanted to be seen as a crowd-follower (cringe!) or simply not be totally left behind I have waffled on sharing this idea for kale. I finally decided to put my narcissism firmly aside (who cares after all?) because this salad is what finally and firmly put me in the kale-eating camp. I mean, I knew it was super good for me - it consistently tops the lists of healthy foods, often being rated as 100 as opposed to the meager 5's of more commonly eaten but considered healthy foods like spinach, oranges, or apples - but there were a few issues* I needed to resolve before becoming a convert. Issues  like a (false) belief that kale is incredibly bitter in taste, and the firm (or tough), curly texture of the leafy green that I find a bit off-putting. Having resolved my issues with the unsuspecting green I am eager to suggest this yummy and easy salad to one and all. It is my version of the chopped kale salad we had at bread&butter in Henderson, NV when we were there last month. Chris made it with the most incredible fresh Utah peaches. Sadly, (good) fresh peaches are only a memory or a dream right now. I was hoping that a good mango might stand in well for the peach but a good mango was also not to be found. Happily (and also not amazingly surprisingly) my very favorite fall fruit is at its very best right now - plentiful, colorful, and reasonably local - so I used a terrific Honey Crisp Apple. Different from the melting sweetness of the perfect peaches but delicious all the same.

After prepping the salad ingredients as per the list, combine them in a large-ish bowl. Puree the dressing ingredients in a blender. This will produce more of a paste than your standard idea of a dressing but it works well with the ingredients. If it is too thick, add a little water but I would caution against making anything that even resembles a runny dressing - it won't play well with the kale. You want something that will stick to the leaves. Aside from that, this paste/dressing loosens up nicely when tossed with the produce. Give it a try.

One of the pluses of the sturdy nature of kale is that this salad will keep nicely for a day in the fridge if you happen to have any leftover :)

note: The second time I made this salad I decided to make the dressing in the food processor (to avoid the frustration of trying to get it all out from around the blade of the blender). Poor choice. It just didn't work. Even in the small bowl attachment there simply wasn't enough volume for the appliance to do the job. So I used the blender in the end and had to wash the food processor as well. bah!

*Issue no. 1 -easily resolved. I was mis-informed.
Issue no. 2 -when I decided to employ the same approach to kale as to curly parsley (that is to chop it finely) the 'curliness' didn't bother me.
Posted by Cheri at 8:03 AM

This salad really was tasty, I too was very Leary of kale, but knew of it's health benefits, and this salad definitely changed that!

p.s. thanks for always posting meals. they totally help me plan my week:)
xoxo