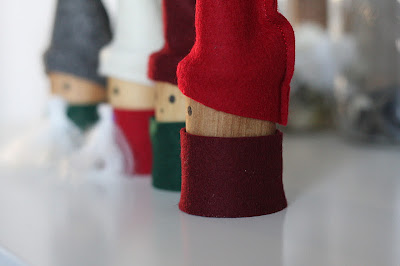 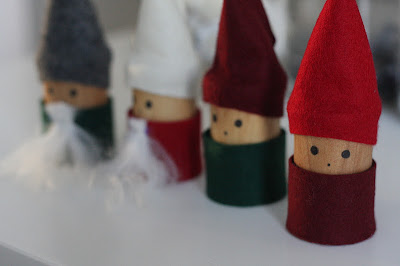 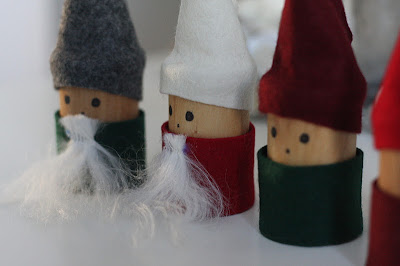 The last day of November! Tomorrow the Christmas fun begins in earnest - and toward that end I present my version of the 'elf on a shelf'. It is truly not that I think I need to one-up the book and packaged elf (does that sound patronizing? hope not) but I just kind of like a handmade product over a mass-produced one. And I like to make things. Hopefully our littles will be enchanted with these elves - one for each family - and have just as much fun with the tradition as many others have.

Years ago David used to tell his little brother Reid stories about Greeny the Elf. Greeny kept an eagle-eye on Reid during December and truth be told (from the stories I have heard) I think poor little Reid was a bit afraid of Greeny. But it was a lot of fun for David, and Reid was a very good little boy for at least a month. Clearly the concept for an elf on a shelf has been around and waiting for ages.

Elf on a Shelf is a cute story and has garnered quite a following. If you google 'elf on a shelf ideas' you can find long lists of elf activities, from simple to elaborate. Many of them way more elaborate than I would be willing to undertake but if that's your thing, that's your thing. Me? I just like to make elves.

These little guys were very simple, fast and fun. I used some old wooden spools, some lovely wool felt, a sharpie to draw the eyes and nose, and a bit of wool I pirated off a fluffy/curly wool pillow that sits in my sewing room. One short seam to sew up the hat and a line of fabric glue to secure the "clothes" and ta-da! done! (Since the elves are not to be touched by childish hands - a rule of the tradition - they don't need to be terribly tough child-proof. Makes making one a lot simpler.)

I printed a set of "Rules" to go with each Elf Scout along with some suggested activities for parental eyes only. Can't wait to deliver these little guys and watch the fun! 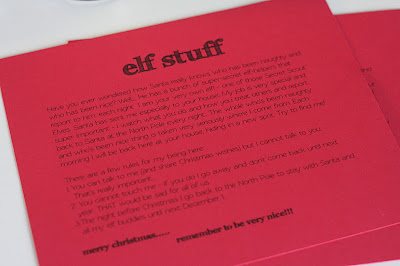 (to give credit where credit is due I was inspired by a simple craft idea in Canadian Living magazine. Their elves were made with toilet paper roles and filled with candies or small toys. 24 of the little guys and you have an adorable advent calendar. I found them totally charming and since I had already determined to make my own elf on a shelf, I just tweaked the idea a tad and had a blast.)

Your little guys are sooooo much nicer than the elf on the shelf in Chapters...so much fun.

they are sooo soo so cute! thanks so much for the thought and love:)
xoxo