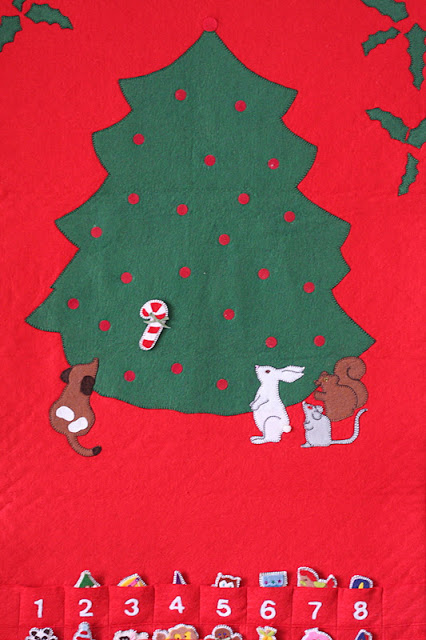 The summer that Eden was a year old (go ahead, do the math, and yes it was a long time ago) I saw a pattern for an advent calendar in the Vogue Pattern Catalogue. I saw it and knew that I had to make it. I burned to have one for my little family. I do not exaggerate my desire. As David was still in university (read: we were poor students) I had to cut a few corners and be a bit creative on a couple of fronts in order to accomplish my goal but I did it. I drew my own version because I just could not afford a piece of felt large enough for Vogue's true vision but I tried to make up for that by embellishing the ornaments that count down the days with sequins and beads - something that Vogue's designers had somehow overlooked. Every afternoon during the precious hour or so of nap-time for my two toddlers I would pull the bag of felt and bits out and sew, then hastily stuff it back in the bag and under the sofa when I heard the first stirring child. It took months of hand-stitching - every stitch sewn with love and the anticipation of how much my kids were going to enjoy this special tradition. I don't think I could have ever guessed how well-loved this advent calendar would be. If I were to die tomorrow, this could well be the most ardently desired item.

Since that time I have wished that I had used white felt instead of red for the background, occasionally decided that perhaps we could use another idea for an advent calendar (always vetoed), have backed the original with supporting fabric to prolong it's sagging life, lost and found ornaments that have been squirrelled away by tiny hands, and refereed more squabbles than I can count over exactly who's turn it is to put up the ornament for the day. (With five kids it was always a race since everyone wanted to do it every day. lol) 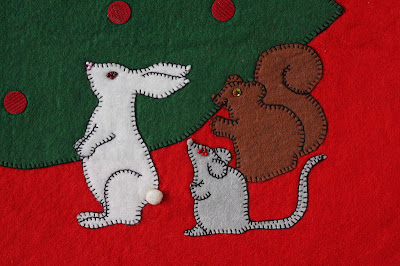 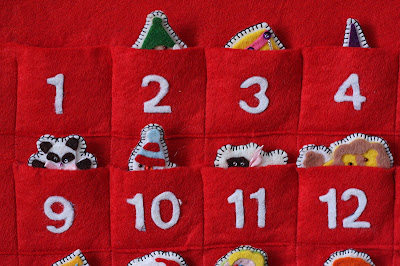 I have made several other advent calendars in an attempt to give more hands an opportunity to mark off the day. They have each been lovely, or cool, or fun, but none has reached the status of the calendar.

Counting down the days to Christmas Day is something that I have always loved. We did not have an advent calendar in our home when I was growing up but I always drew my own version and religiously marked off each day with mounting excitement. Now that there are no little ones running to mark the passing days with my (now nearly vintage) calendar a lot of the fun is lost but I still find myself drawn to the concept of this activity. I have intruded myself on my kid's families and made sure that they each have an advent calendar of some sort (whether they want one or not) and would probably make a new one for each family every year if I only could get myself organized early enough to do so! (somehow I never think about starting it in August anymore.) The red calendar goes up on December 1st here - even though I am now a bit embarrassed by some of the work on it - because of the sweet memories it stores.

For my personal countdown this year, I am planning hoping to mark each day from now to Christmas by sharing something here. Something that I love about, or do, every Christmas. Seems like a fun way to count the days of this wonderful season.
Posted by Cheri at 6:47 PM

I love this post. What a loving mother I have. Thank you for putting so much love and thought into everything you have and continue to do for us kids. We are so lucky to have such an example of selfless love.

We all adore this calendar!!!! and I love that its red. no regret on my end:)