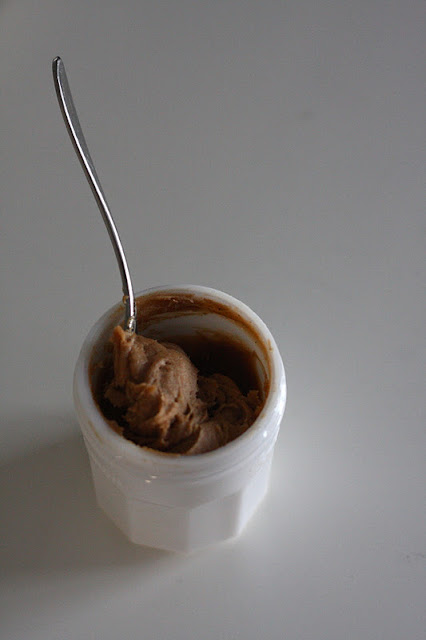 Have you had this stuff?!! It tastes like Christmas in a jar and although I have heard that it is meant to be a spread for toast and such, the only way that I really have experience with eating it is straight off the spoon. That is likely the way my experience will stay and I know that I am not alone. It is addictively good and sadly not available for purchase (as far as I can tell) anywhere in North America. Those two realities motivated me to try a knock-off version. This is pretty good....no, actually it is amazing. What I am not sure of is how closely it follows the inspiration since I tasted the 'real' Speculoos Spread in October and it is now December but even if it isn't a dead-ringer for the real deal it is still delicious. And you don't have to go to France to get it. (But I would if I could....)

My original intent was just to give it a whirl on my own but then I thought about re-inventing the wheel and all that, and went to google to see what might be there. Sure enough I am not the only one with a yen for this spread and no plans for a trip to France. I took what was offered, messed around with it a bit, and this is the result.

I used extra-virgin coconut oil as the base for my spread. I know that many do not view it  as a healthful oil because it is a saturated fat. Please reconsider if that is your view.  Coconut oil contains large amounts of the medium-chain triglyceride lauric acid. Lauric acid has been shown to be antimicrobial, antibacterial, and antiviral! Additionally it has the great virtue of killing the 'bad' bacteria while leaving unharmed the friendly bacteria that is needed for healthy digestion. The absorption of calcium, magnesium, and amino acids has been shown to increase when infants are fed a diet using coconut oil. And populations that consume coconuts as a major part of their diets rarely develop osteoporosis. These and many more healthy advantages have convinced me that the saturated fat component of coconut oil is something that is misunderstood - not to be confused with trans fats which are to be avoided for sure!  (the fats found in fast foods and much processed food) - and is actually a source of much that is healthful. With the information I have have at hand right now I have decided to enjoy those benefits. If you are not convinced but want to try this spread you could use another type of oil.

Initially I was a trifle disappointed that the spread separates a tiny bit when it sits for several hours, but hey! so does my almond butter - and to a much greater degree.  However it does emulsify nicely with very little stirring - which my almond butter does not. The texture is lovely and smooth, and everyone needs something to have a spoonful of when the mood strikes. It would be a great little food gift .... if you need something like that.

In a food processor, process the cookies to a fine powder. Add the vanilla, coconut oil, cinnamon, sea salt, and brown sugar and process until well mixed and smooth. With the motor running add the lemon juice and water in a thin stream. Keep processing for a minute or two - until the spread is a very smooth, silky paste.

Store in a clean jar in the fridge. Because the oil is coconut oil it will be pretty firm immediately after coming out of the fridge so allow about 30 minutes before you want to eat it for it to warm up and soften a little. Give it a quick stir and dive in! 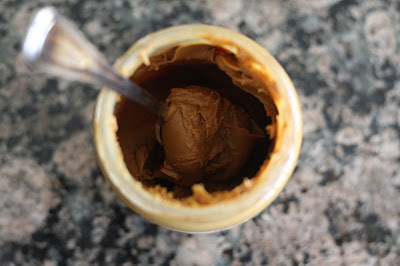 (In order to compare my spread is the top pic, the original is the one immediately above)

*Anna's Almond Cinnamon Thins taste almost exactly like Speculoos biscuits and are readily available at IKEA all over the place and in Canada at many supermarkets including Safeway. The original spread lists Speculoos biscuits as the main ingredient.

This post is dedicated to Graeme and Allie - who love Speculoos and  (like me) -sadly have no plans for a trip to France in the foreseeable future.

I was so excited to see this post! I love Spekuloos spread and I can't wait to try this recipe. I had it for the first time a couple months ago when I ate at a food stand called Wafels & Dinges in NYC. Besides the fact that they make the best Belgian waffles outside of Belgium (made with dough instead of batter), they also use Spekuloos spread! I believe you can purchase it off their website: http://www.wafelsanddinges.com/shop.html. Just wanted to let you know that there is at least one place that sells it in North America!

Love your blog and thank you for all the great recipes :)

I had it at the very same waffle stand in New York in June - just a few months after consuming a jar that my friends brought back from France with them. It's INCREDIBLE. To everyone that hasn't had the pleasure yet, you NEED to try this. And mom.... is there anything you can't figure out?!

You are officially my culinary hero, Cheri.

This speculoos spread actually it is amazing and I used extra-virgin coconut oil as the base for my spread. You have made this excellent recipe and its very beneficial to me.

eToro is the #1 forex broker for beginner and pro traders.