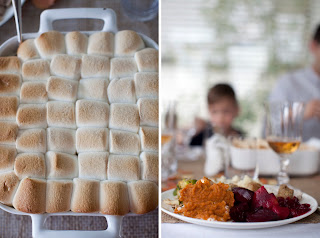 Once upon a time, when we lived away from family and long-distance calls were prohibitively expensive and e-mail was not for the masses, I was planning a holiday dinner and wanted to serve sweet potatoes. I couldn't find a recipe that appealed to me and so I decided to just try something original. Happily, it was a success and is the one item on the menu that is not negotiable for our family (other than the turkey of course!) In fact, Eden says it is the base of the meal as well as the cap. I have never written it down but have been asked to and so here it is.
Spiced Sweet Potatoes
2 large yams (or 4 medium)
1/2 cup unsalted butter
1/2 tsp salt
1 1/2 tsp cinnamon
1 tsp nutmeg
1/2 tsp cloves
1 cup brown sugar (I use a mix of dark and light brown sugars)
juice of 1 lemon
juice of 1 orange
Bake the yams at 350 F for about an hour or until they are soft. (Smells soooo good!) Remove from oven and peel - the skin pretty much just slips off. Mash the flesh with a potato masher and add the butter, salt, cinnamon, nutmeg, cloves, sugar and juices. Mix well. Taste and adjust the spices if you want. Put the mixture into a 9x9 baking pan. Cover with large marshmallows and bake at 350 F until marshmallows are puffed and brown - about 15 minutes if the mixture is hot or if you have done the prep in advance of roasting the turkey (or whatever) it will take about 30 minutes so that it is heated through.
This year Jonathon and I had the same thought at the same time - to chop some pecans and sprinkle them over the sweet potato mixture before putting the marshmallows on. It was definitely a good thing.
Posted by Cheri at 9:34 PM

These will definitely be on the Simpson family menu for next Thanksgiving....maybe we can't wait that long. ylfn