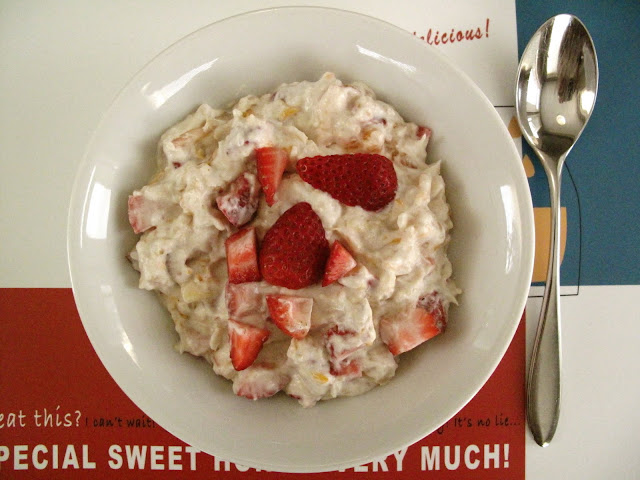 Long ago and far away - when we had just two little kids and breakfast was usually either instant oatmeal or cheerios - I wanted to make a special breakfast. I pulled out my cookbooks (so far away and long ago that I only had a few!) and did some research. I found a recipe for something called "Swiss Porridge". It looked good - in other words like something both parents and wee ones would eat and my food budget would tolerate - and so I gave it a spin. Big Hit!! Over the years it has morphed into a version that the original authors would likely not recognize, so it is probably not very 'Swiss' but we all love it. It has remained a special breakfast, one that is often requested for birthday mornings or the treasured times that we are gathered as a large family for breakfast. I am posting the recipe today in honor of Merin's birthday - October 4. It was her certain choice every year to start her birthday day.

Mix all ingredients together. Enjoy!

I often improvise a bit with the fruit and add whatever looks good or is in season. Today I used some fresh peaches, other times I might add blueberries, etc but this recipe is the base. I also sometimes add 1/2 tsp cinnamon - if the mood strikes. However you make it, it is a sure hit. Nobody has ever not liked it... or if they have they have been too polite to say so! 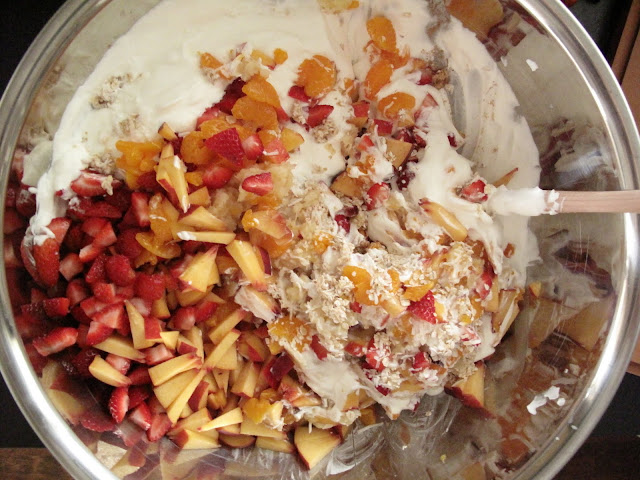 Email ThisBlogThis!Share to TwitterShare to FacebookShare to Pinterest
Labels: breakfast

yes it was and still is big hit! but then again pretty much everything you make is a big hit.