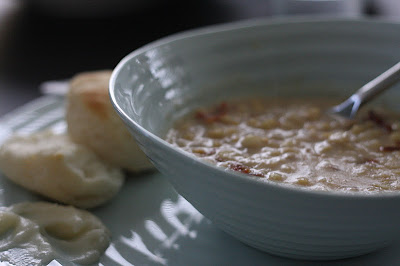 Dinner last night needed to be comfort food and corn chowder is about as definitive in that regard as you can get. We used Merin's pretty dishes and enjoyed a simple meal of plain good food. Hannah made the most amazing delicious biscuits and honey butter to go with the chowder. We all got up from the table perfectly satisfied - filled with laughter, love, shared memories, and warm chowder and biscuits. David ended the meal with "m-m-mmmm" in Merin's honour - her typical expression of delight in what she ate.

This chowder is made with fresh corn cut from the cob and then uses the cobs as well. You could use frozen corn (and I have when fresh is not available) but take advantage of the season and make a better chowder with fresh.

In a large saucepan over medium heat, bring the milk to a low simmer.

Cut the kernels from the cobs.* When the milk is warm, add the cobs only and simmer for 10 minutes. Simmering the cobs in the milk draws out the juices and with it tons of flavour.

While the cobs simmer, combine the oil, onion, potato, and thyme. Saute until the potatoes are golden. Add the garlic and saute another minute.

Remove the cobs from the milk. Using a cloth (so as not to burn your fingers) hold one end and stand the cob on its end on a plate. Using a butter knife run the back of the blade down the cob pushing out the last bit of the kernels. Discard the cobs. Add all the corn (the bits you have just pushed out of the cobs and the kernels cut off) and the potato mixture to the milk. Add the salt and chicken broth. Simmer for 15 minutes or until the potatoes are tender.

Meanwhile cook the bacon to crisp. Drain on a paper towel and crumble.

Just before serving mix together 1/2 cup milk with 2 Tbsp cornstarch and 1/2 tsp baking soda. Stir into the soup and let thicken slightly. Stir in the 1/2 cup heavy cream and season to taste with salt and freshly ground pepper. Sprinkle each serving with bacon crumbles.

*To cut the kernels from the cob stand each ear on its wide end and using a serrated knife saw down the length of the ear. It's a bit of a messy job as the kernels love to bounce onto the floor but persevere, it is well worth it.

This really was good. Reeaaally good. And Hannah's biscuits were at least as good!

Such a treat to be home for some warm soup and love.

Cheri, I just want to tell you that I absolutely love your blog. It always makes me smile and feel good!

Thank you for sharing, xo

Holly made this soup for us this week. It is pure deliciousness. Thanks for sharing.