With lots of assets (great curb-appeal, location, space and potential) this little house had a few less desirables. The most obvious of which was the kitchen. 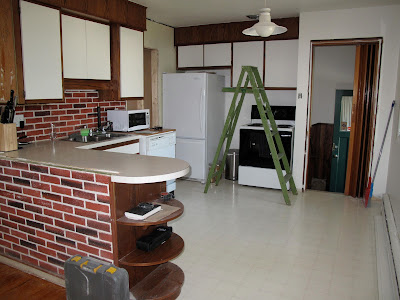 It was, to not put too fine a point on it, a disaster.  Totally unworkable from a current perspective. And that isn't even getting into that it was just ugly. The cabinets were too small and too few.The layout impractical. The counter space was almost non-existent. And  ugly! How about the faux brick combined with the dark faux wood paneling? As we 'excavated' we discovered three different layers of laminate on the counter, two layers of vinyl flooring over top of the original linoleum tile and yes, two layers of wallpaper along with evidence of 3 separate color schemes in paint that was revealed as we worked. Wow! The original owners really liked to redecorate. (and who am I to knock that?!)


For the better part of the year that Mike and Merin owned the house the kitchen looked like it does above. At the end of May - a month before little Ysa was due - they pulled everything out right back to the studs. So there was nothing - no water, no counter - not even the vinyl flooring. The hope was to have the kitchen in and finished by the end of the summer. It was a challenge for the end of a pregnancy and even more so for a new mom but Merin was willing to do it and  looked forward with excitment to the finished and functional kitchen. 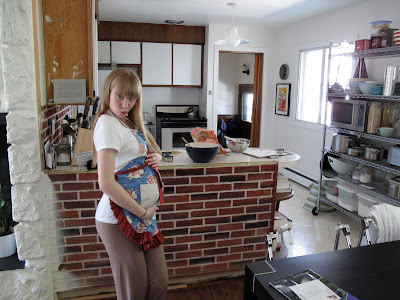 Merin and I spent many hours brainstorming ideas, drawing the plan, shopping for finishes and fixtures. It was my idea of great fun. It also put me in the unique position of being able to execute the plan after the accident - to know that I could finish it so that the kitchen looked just like she wanted it to. I did. And it does. It is, I think, pretty fantastic. 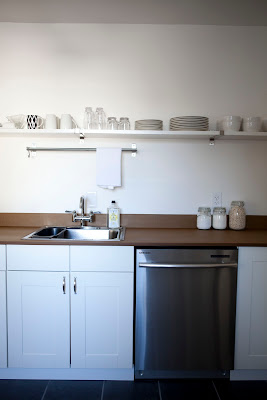 Now there is a very functional, large, deep single bowl sink to replace the shallow and entirely frustrating itty bitty sink. And the dishwasher we found is a huge upgrade over the old portable. We chose to install the shelf instead of upper cabinets. It kept the kitchen much more open and is a younger, hipper look. The countertop is Richlite, a material that is fantastic. It will not burn or stain, is more forgiving than stone if things are dropped on it and has a softer, warmer appearance. 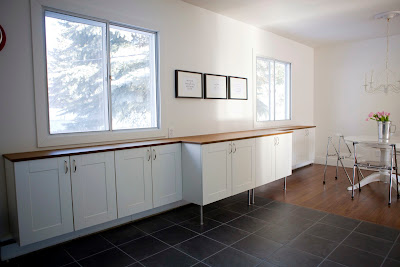 We mounted upper cabinets on the wall under the windows. This addressed several issues - the baseboard radiant heating that could not be moved, the need for more storage, as well as the need for countertop. Brilliant solution. I like the way it 'floats' - visually light and open. (Merin and I had planned to paint the space between the windows with blackboard paint - a great graphic hit -but since the house is no longer for them but resale that was deemed a potential hazard. I still thought it would be amazing. Oh well.) 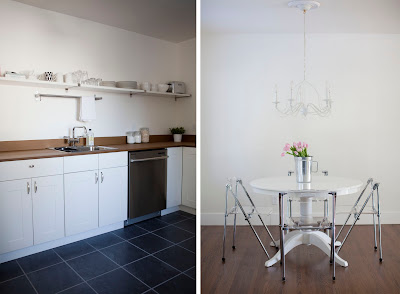 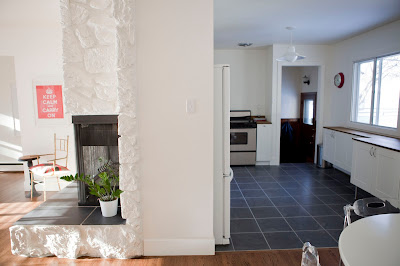 The new ceramic tile floor is practical and, in my opinion, cool-ly graphic. The kitchen light fixture was original as is the lovely chandelier over the table. We thought it was fun to keep that bit of history - and, after shopping, we really liked them.
Merin would have been beyond thrilled with the result, the product of all the dreaming, working, and sacrifice of convenience. I have felt comforted (although at times it was very hard) as I have had the opportunity to do this for her. For me it has been important. I wish she could have used this kitchen but she was so happy here in this little house of love and dreams even without it. I remind myself that it doesn't matter so much where we live but how we live. I can be grateful and therefore happy or I can not. I choose. Every day. I can honor her memory by choosing well.
It is a very good kitchen. Sweet, practical, beautiful, cool - perfectly Merin.
I know that most of  you have likely seen many of these pictures from Eden's blog but since I was so intimately involved in the process of getting to the "After" stage, and since who doesn't love to see the "Before"s, this is my offering.
I acknowledge all the hours of help and work contributed by Merin's brothers, father and uncles, they selflessly gave many,many hours doing work that was not fun. It was a gift of love.
All after photos are courtesy of edenlangpictures. Thanks so much Eden for your beautiful work.

Email ThisBlogThis!Share to TwitterShare to FacebookShare to Pinterest
Labels: decor, make-over, things I do

Cheri thank-you for sharing! i think sometimes it would have been so nice to live in calgary longer, and gotten the chance to get to know merin better. we were both in the same ward right after we got married and i was always so impressed with her style {i think we have some similar tastes}. Isn't it just so much fun dreaming up ideas about redecorating, i fall asleep thinking about how i could make my home feel more the way i want it too all the time. I hope one day i will get to design my own home. I am in love with merin's kitchen, thank-you for sharing!

Hi Cheri, I have just spent the last hour catching up on your blog. It had been a while since I had been on it. The way you write, your photographs (Eden didn't just miraculously arrive with her amazing talent, you are so good too!), everything you do has such class and style. With the things I have going on in my life, I really found spending time on here a comfort to me. It took me away for a little while. Thank you.

I remember just after Mike and Merin bought the house she sent me an email talking about how excited they were - but she said that there was so much work for them to do. I had no idea how true that statement was... WOW!!!
What’s so amazing is the gift that you and Merin had of envisioning the final product (with what you started with that truly does show a MAJOR gift). The kitchen just SCREAMS Merin - well really the whole house does.

It has to be said that Heavenly Father did not miss an ounce of creativity in the Litchfield’s when he was handing out talents. You are all so gifted!
I’m sure that both Mike and Merin are very proud of how everything worked out with the house and the love that was put into their home by you all.

Thank you for sharing these. I look at Eden’s blog and am marvelled at her photo’s of the house (well her photo’s in general floor me) and to add these “before” photo’s to them, it shows the complete transformation!

Amazing transformation!! You Litchfield ladies have such a gift. It's beautiful.

It is absolutely stunning. You all did a beautiful job. I am sure she would be delighted.

Wow, Cheri, the kitchen looks fabulous. You must be so thrilled to have completed the plans that you and Merin made together. I can't believe how awful it looked in the before...I'm sure it looked way better when I saw it in it's shell like stage!! You have such a creative and stylish touch. I wish I could borrow it for my house. One resolution was to start by de-cluttering,but so far too much work.
ylfn

eToro is the ultimate forex trading platform for rookie and professional traders.

The post has really talks my interest. I am going to bookmark your website and keep checking for new information.

Nice Blogs!
Thanks for sharing this informative blog.
As one of the most reliable and economical companies in Sydney, we have maintained a good reputation in the flooring industry. We are a team of installers who have vast experience in this field, and we provide services of floor covering to all people who need them. We do floor covering all types of materials that our customers need. These include Laminate flooring, Vinyl Flooring, Hardwood timber flooring, Hybrid SPC waterproof flooring, and European engineered timber flooring any many more.
JW Floor Corvering