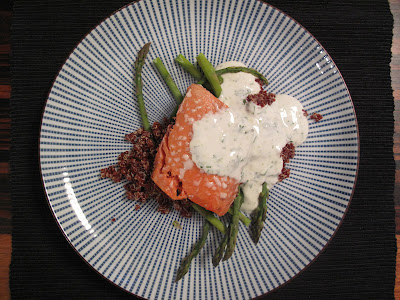 I made this a few weeks ago and wished I had taken a picture of it so that I could share it with you but I hadn't and all I could show was a very empty plate. Because I have been telling all sorts of important people (my kids, good friends, strangers in line at the grocery store) that they really need this recipe and because it is fast, easy and good I made it again today. And this time I did take a picture. This meal is very good, just as fast, super easy, and extremely healthy. (You know all the lists of super/power foods that abound? I think almost everything in this recipe is on those lists!) The recipe is from Quinoa 365 the Everyday Superfood by Patricia Green and Carolyn Hemming. I haven't tried anything close to all 170 recipes but the ones I have tried have been winners. This one for sure is on our "make again soon" list. It looks pretty amazing plated up - almost as good as it tastes.


Bring the quinoa and water to a boil in a small saucepan. Reduce heat, cover and simmer for 10 minutes. Turn off the heat but keep the pan on the burner for another 6-8 minutes, then uncover and fluff with a fork.


Preheat oven to 400 F. Place the fillets on a foil lined baking sheet, rub with olive oil. Bake for about 12 minutes or until salmon flakes easily.


While the salmon and quinoa cook, steam the asparagus.


Arrange the steamed asparagus on individual plates. Spoon on a portion of quinoa, top with salmon and drizzle (or pour if you want - it's really good) the lime-cilantro sauce over the salmon. Enjoy! I served additional sauce at the table - just because we liked it so much. 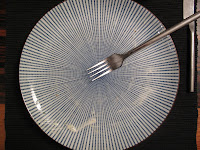 (My empty plate - again! I practically licked it clean! mmmmm )
*The first time I made this I used the sour cream called for. This time I didn't have any so I subbed non-fat Greek yogurt (plain) for the sour cream and it was equally delicious.

Fast and easy to cook, quinoa has been identified as one of the world's healthiest foods - it is a nutritionally superior source of non-animal protein, contains all the essential amino acids, and is a good source of fibre. It can be used in many ways and incorporated into almost any type of dish from appetizers to desserts, soups to breads.
Posted by Cheri at 8:21 PM

yum. and just in time for my menu planning. thanks!

Mmmm. I can't wait to try this one!

This was every bit as easy and at least as delicious as you promised. I subbed the yogurt for the sour cream and I used some lemon juice as well as lime because I was short but it was pretty awesome.

We love salmon and so I tried the recipe. The lime/cilantro sauce was beyond delicious. Thank you for taking the time to share with us.

Thanks! Salmon is my favorite and I love the sauce.!